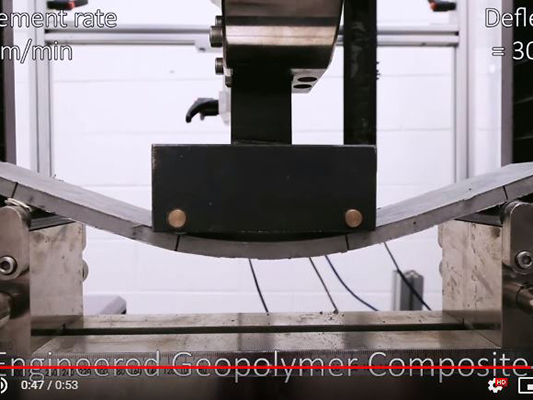 Concrete is the most widely used building material on earth with an annual production of over 10 billion tons! Its main qualities are high compressive strength and its excellent compatibility with steel.

Steel reinforcement is necessary due to one of its main disadvantages - extremely low tensile strength. Or more precisely, about 10 times less than that of pressure. Thus, standard concrete, without reinforcement, does not withstand high tension, therefore it cannot be bent. For years we have been working on the development of concretes that take more tension. The combination of microfiber fibers, polymers and cement are the main technologies for concrete, bearing significant bending. The second major drawback is the environmental footprint of cement production. In 2020, concrete production generated about 1500 000 000 tons of CO2 emissions.

Now, researchers at Swinburne University have developed a new type of concrete. Not only can it bend better, but it doesn't need cement. This feature significantly reduces its environmental footprint. The improved recipe of the concrete mix requires significantly less energy for the production of materials, as well as reduction of carbon dioxide emissions during production.

Instead of cement, industrial waste products such as fly ash extracted from exhaust gases in coal-fired power plants are used to make it. This geopolymer composition can solidify at room temperature.
The use of such waste products in concrete has been practiced for a long time. With the new technology, however, the team claims that this is the first time it has been used in concrete, allowing significant tension and bending. The resulting material reduces energy consumption and greenhouse gas emissions during production, while being far more flexible than standard concrete.

"The production of this new concrete requires about 36 percent less energy and emits up to 76 percent less carbon dioxide than conventional flexible concrete made of cement," said Behzad Nematolahi, the study's author. "The results of our laboratory tests show that this new concrete allows about 400 times more bending than commonly used concrete. However, it has similar strength.

And even when the new material finally cracks, the polymer fibers in the mixture continue to absorb the tensile force. The element remains under tension with many small fractures. The team sees application in the construction of buildings in highly seismic areas. Reducing the carbon footprint should help make the new, more expensive material more desirable.

Despite the good performance, questions remain such as the final cost of production, available quantities of raw materials, recyclability, whether it emits harmful emissions during operation and to what extent it is compatible with the still required conventional reinforcement.